An exercise in visualizing a text geographically.

In First Footsteps in East Africa (1856), the well-known and much-celebrated explorer, Richard Burton situates his travels into East Africa within a larger discourse of world travel. The Preface to First Footsteps catalogues names of travelers, places charted, maps made, and people governing British global travel. The first 2 chapters that follow the Preface detail Burton’s travel by ship between the port cities of Aden (Yemen) and Zayla (Zeila, Somalia).  As he moves between these two ports, places of trade and exchange, Burton undergoes a personal transformation, indeed literally shedding his clothes, his manners, and the vestiges of his perceived “Europeanness.” By the time he reaches Zayla and having donned his disguise of Arab merchant, Burton assures (shockingly, perhaps) his readers that he finds himself feeling “at home” in the city and among its people

His subsequent descriptions of place in the city of Zayla and his journey to enter the walled city of Harar are marked by careful characterizations of people as Burton interacts with them. That is, he orients interactions around himself as European in Arab disguise—a kind of double or duplicitous orientation in which the reader is only sort of in on the hoax. He describes the landscape in some detail, including catalogues of flora and human-made structures. Rather than adopting the position of an outside observer, Burton’s descriptions are, in most cases, very much linked with how he situates himself in this place. 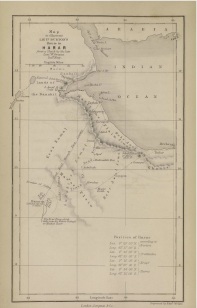 Map of Burton’s journey from Zaylah to Harar in 1854

I began my attempt at mapping (with Neatline, an Omeka plug in) Burton’s journey to the interior with questions about how and why he situates his ground travel to Harar among these other cited British travelers who charted space, especially in the global south, creating a
planetary network in the service of Britain’s Imperial interests. I began with questions about the topological relationship between the local and the global in Burton’s account.

My results (a work in progress) showed me the difficulty of mapping local routes that are fraught with textual experiences and images.  On one hand, in the local (zoomed in) East African space of the map, it is challenging to represent the continuity of the journey, the double identity of the traveler, the relevance of confrontations, and the deliberate transgression of borders without simply reprinting textual detail. Local space is, on the mapped page, relatively chaotic.

Zoomed in view of Neatline Map of East Africa as seen by Burton in 1854, annotation, and contents table

Overall, in using Neatline to delineate and plot Burton’s travel account, I found that the experience of reading closely for place and for flows compelled me to engage differently with the narrative and with space of the book. My work with Neatline offered an opportunity for understanding or perceiving the text from angles, that included topographical relationships, the ways in which we place experience, and the relevance of markers or signposts at moments that punctuate and delineate a journey.

I certainly feel renewed enthusiasm for my work with First Footsteps and am intrigued by the idea of looking at other travelers (such as Somali, Ethiopian, Indian, Middle Eastern) in this area and mid-nineteenth-century time to compare their representations of travel and local networks.